Kraken vs Coinbase: How These Leading Exchanges Compare

When it comes to crypto exchanges, Coinbase and Kraken are some of the largest in the world. But who has an upper edge over the other? This article will answer that for you. 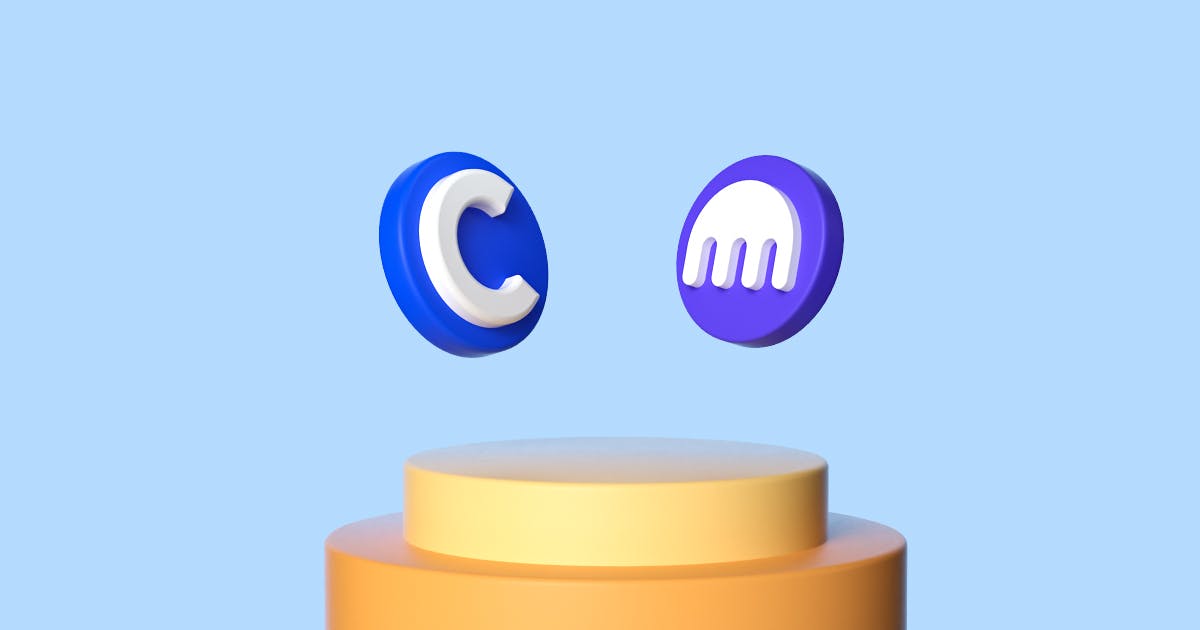 As per the latest reports, the number of crypto users stands at 101 million today. It is a considerable increase compared to the number of users in 2017, as there were only 5.8 million crypto users in 2017. Such an astounding growth of the crypto market led to an increase in the number of crypto exchanges in the market. Even with a flurry of cryptocurrency exchanges, some notable names still dominate the market. Coinbase, with 43 million users, and Kraken with around 4 million users, are among the largest cryptocurrency exchanges in the world.

What are the most important aspects for a crypto user while selecting a crypto exchange? Liquidity and Security. Both Kraken and Coinbase are some of the most secured & liquid exchanges in the market. But there are a few differences among them. A crypto user must know about these differences before opting for any of them.

You must not select a cryptocurrency exchange based on its popularity alone. Of course, popularity is an important factor as it leads to higher liquidity on a crypto exchange. But when you compare crypto exchanges in terms of the features important to you, it will be clear which of the crypto exchange is better. Let's not wait for any further and dive straight in to see how Kraken fares against Coinbase.

Founded in 2011 by Jesse Powell, Kraken is one of the oldest cryptocurrency exchanges still in existence. It offers a wide range of features to crypto users around the world. It is also well-known for its top-notch security and low transaction fees. Kraken offered users to trade Bitcoin and Ethereum for Euro when it launched in 2013, but since then, Kraken has expanded its crypto offerings with 50+ cryptocurrencies. It is important to note that due to its European roots, Kraken is far more popular in Europe than in the United States.

The story about how Jesse Powell got an idea to launch a cryptocurrency exchange is quite interesting. Before launching Kraken, Powell had visited the office of Mt. Gox. It was the world's largest cryptocurrency exchange then. During the visit, Powell was taken aback by the lack of concern for safety and security features on Mt. Gox Exchange. Thus, he felt that the market needs a replacement of Mt. Gox because of a lack of security features.

Powell was correct in his assessment of Mt. Gox, as it was hacked in 2014, resulting in a loss of $460 million of customer funds. During the tough days of Mt. Gox, Kraken stepped up & played a crucial role in obtaining the stolen Bitcoins stolen from Mt. Gox. Many crypto users came to know about Kraken during the Mt. Gox debacle.

Today, Kraken holds immense influence in the crypto market. As of now, Kraken offers 50+ cryptocurrencies for trading, and crypto users can trade over 200 cryptocurrency pairs on Kraken. Since its launch in 2013, Kraken has also raised over $100 million in funding.

Founded by Fred Ehrsam and Brian Armstrong in 2012, Coinbase is one of the true giant companies in the crypto space. Available in over 100 countries, Coinbase has amassed over 43 million users. Initially, Coinbase was focused only on Bitcoin brokerage. Customers were able to purchase Bitcoins directly from Coinbase when it began its services. But with increasing popularity, Coinbase kept on adding new products and services.

Coinbase was a part of the Y Combinator startup incubator in its heydays. Today, it has come a long way from its Y Combinator incubated startup days. With over 1,000 employees and $547 million in funding so far, Coinbase is already generating a massive $2 billion in revenue and has a market cap of $70 billion. Coinbase counts many high-profile investors such as the New York Stock Exchange and Andreessen Horowitz as investors.

The company also invests in various crypto-related startups through its venture capital fund known as Coinbase Ventures. Acquiring companies has been an important part of Coinbase's growth strategy as it has integrated many new features and functionality in its offerings by acquiring several companies. Some of these companies are Bison Trails, Routefire, Tagomi, Blockspring, Venovate, and many more.

Kraken vs Coinbase - Ease of Use

Cryptocurrencies are now entering the mainstream, and this has led to their rise as an investment alternative. With more & more users purchasing cryptocurrencies through crypto exchanges, the focus is shifting on improving the usability of exchanges.

When it comes to the usability of Kraken, there's no doubt that it is definitely an easy-to-use crypto exchange. Even with a plethora of features and capabilities, at no point in time does a crypto user feel overwhelmed while navigating and using Kraken.

Coinbase makes it even easier for a novice crypto user to learn how to buy & sell cryptocurrency. They also get extra marks for a quick sign up process as users can sign up on Coinbase within a matter of minutes. Is this your first time trading cryptocurrencies? If yes, you can learn more about cryptocurrencies and how it works through the Coinbase learning program.

A new user will likely be impressed by the easy-to-use interface of Coinbase. The crypto trading on Coinbase becomes even better with the hourly, daily, weekly, yearly, or all-time basis statistics on each coin. It enables crypto users to make data-driven decisions. Coinbase has invested a lot of time and money in the user experience aspect of its services & products. Overall, Coinbase offers a smooth & painless user experience.

Kraken, since in initial days, took the safety and security aspect seriously. Their founder, Jesse Powell, made sure that they do not make the same mistakes that Mt.Gox made. To implement world-class security features, Kraken went through rigorous internal testing. Kraken remained in closed beta for two years before launching to ensure that the exchange is fully secured to prevent any security breach.

When it comes to Kraken's user funds, 95% of it is stored in an offline, air-gapped cold storage. On top of that, it is geographically distributed. It proves that the Kraken team is fully dedicated to keeping user funds safe. Their servers are also monitored 24×7 by video monitored and guarded by armed personnel.

Kraken keeps your accounts secured through Google Authenticator and Yubikey-powered two-factor authentication. There is no option for phone or SMS account recovery. They have also made email confirmations mandatory for withdrawals. There's also an option of global settings time lock when you are away. There is constant and real-time monitoring to spot any suspicious activities. You don't have to worry about your sensitive data getting hacked as it is fully encrypted, both at rest and in transit.

Coinbase keeps 98% of its user funds in offline cold storage. It means that it cannot be hacked. The rest is stored in a hot wallet system of Coinbase and the rest is covered for up to $255 million. It ensures that even if your funds were stolen from Coinbase, you will get them back.

The Coinbase application prevents CSRF attacks by filtering and verifying POST, PUT, and DELETE requests through SQL injections. There is also a rate limit on actions such as login attempts on the Coinbase website. To prevent mass-assignment vulnerabilities, Coinbase whitelist attributes on all models.

Being licensed under the pilot BitLicense program in NY, Coinbase adheres to the strict KYC requirements. Coinbase also makes sure that its products and services remain compliant with all required regulations and rules. As we said, Coinbase takes legal compliance very seriously, and this is obvious from the fact that Coinbase has licenses to operate in 40 U.S. states. Coinbase is also in the process to obtain the necessary licenses to operate in international countries, where a license is a must for any company to run a digital currency business.

Kraken is very transparent when it comes to the fee structure. It is one of the top signs that you should look for when vetting a crypto exchange. Kraken has categorized the fees as per the trading volume of users. The other factor that plays an important role in deciding the fee is if you are a maker or a taker in the trade.

A user will also have to pay a withdrawal fee every time they withdraw crypto assets from Kraken. Again the fee varies from cryptocurrency to cryptocurrency. Withdrawing Bitcoin attracts a fee of 0.00015 XBT, whereas to withdraw DAI, a user will have to shell out 2.5 DAI as fees.

When it comes to the fee structure of Coinbase, it may confuse some users. It is important to note that the price that you pay on Coinbase for buying cryptocurrencies consists of several components. A user has to pay a spread fee of 0.5% to 1.00% along with the fee that they pay on the total transaction amount.

Payment through a U.S. bank account or Coinbase wallet will attract a 1.49% fee. Do you want to use a debit card on Coinbase? Then, you will have to pay a 3.99% fee for using a debit card to fund your Coinbase account. On the other hand, the instant card withdrawal fee varies by the origin of your card. For instant withdrawal using a United States card, you will have to pay a 1.5% fee, and in the United Kingdom, the fee for instant card withdrawal is 2%. The users based in the United States can opt for ACH transfers as it's free. For wire transfers in the US, the incoming wire transfers will attract a $10 fee, and the outgoing wire transfer attracts a $25 fee.

Kraken accepts users from around the world other than Afghanistan, Congo-Brazzaville, Congo-Kinshasa, Cuba, Iran, Iraq, Libya, North Korea, Syria, Tajikistan. It is to be noted that users from the Central African Republic, Eritrea, Guinea-Bissau, Lebanon, Mali, Namibia, Somalia, South Sudan, Sudan, and Yemen can create an account on Kraken. But they won't be able to fund it.

Coinbase, on the other hand, is available in 100+ countries. It includes the United States, Canada, Brazil, India, and many more. In terms of absolute numbers, Kraken is available in far more countries compared to Coinbase.

Kraken vs Coinbase - The Conclusion

Do you prioritize lower fees? Then under normal conditions, Coinbase charges higher fees compared to Kraken. It is especially true when it comes to low volume traders. Kraken has less fees for traders in lower tiers of trading volumes compared to Coinbase. If you are a beginner and looking for an easy-to-use cryptocurrency exchange, then you should opt for Coinbase.\

Now, when it comes to security, both Coinbase and Kraken have made sure to implement the highest grade of security possible. But Kraken has a slight edge here as it was built to offset any counter-attacks. Kraken remained in closed beta to ensure that it can thwart any hacking attacks aimed at it. They keep security above everything, and this is also obvious from one of their mottos.

Once per week, I send insider tips, news and exclusive offers to help you earn more with your crypto. It's short and useful.